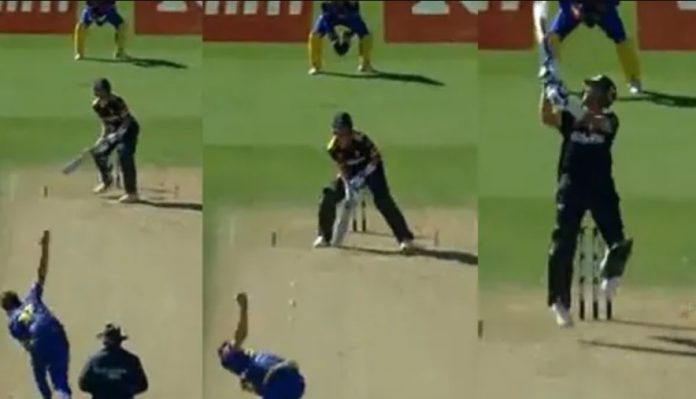 There is literally no hiding from the fact that T20 cricket has triggered the cricketers to come up with new stuff in the best possible way. At times, we have seen players bring the best out of themselves in the form of innovation.

Be it a cracking delivery by a bowler or an innovative shot by a batter, the T20 cricket has seen it all. Meanwhile, ongoing New Zealand’s Super Smash 2021-22 tournament has witnessed compelling moments in the course of the play.

Earlier, we saw Trent Boult pulling off the ropes from the jaws of the defeat as he helped the team score a six off the last ball and guided his team to a memorable win. Similarly, Lockie Ferguson took a cue from Boult as he channelised his aggression by smashing a six when the team required 5 off 2 balls.

Nathan Smith plays a mesmerizing shot in the tournament

While we watched so many eye-catching moments already, there is another one recorded during the 15th game of the tournament between Otago and Wellington at John Davies Oval, Queenstown. Wellington’s middle-order batsman Nathan Smith played one of the top innings as he scored 38 off just 18 balls including 4 maximums.

Moreover, he maintained an exceptional strike rate of 211.11. Earlier, Otago posted 166/7 in 20 overs. Anaru Kitchen scored 54 off 34 balls including 5 fours and 3 sixes. Jimmy Neesham led the bowling pack by example as he took 2/17 in 3 overs for Wellington.

In reply to Otago’s total, Wellington chased down the target with four balls to spare and won the game by 5 wickets. Tim Robinson was the pick of the batsmen as he scored 65 off 49 balls including 8 fours and a six. Finn Allen scored 32 off just 13 balls including 3 fours and 3 sixes.

However, the ultimate highlight of the game was when Nathan Smith pulled off an outrageous shot in his repertoire and took everyone by surprise. Fans couldn’t stop reacting to the video that has been doing the rounds on social media.

Did someone say RAMP SHOT?!