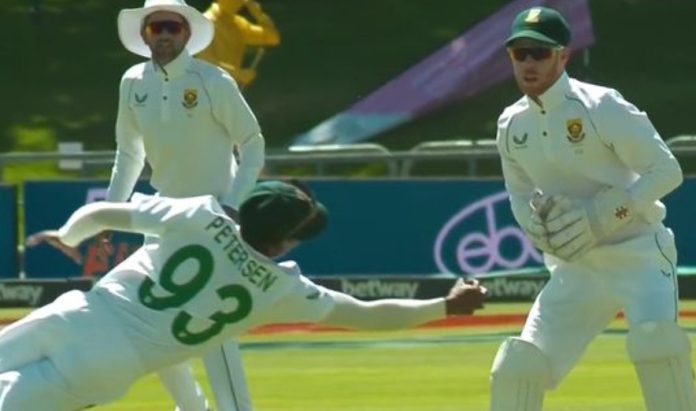 Cheteshwar Pujara came out with an intent to bat on Day 3 of the third Test match against South Africa at Cape Town. Indian cricket team players find themselves in a spot of bother after they lost KL Rahul and Mayank Agarwal early on in the second innings.

However, Virat Kohli and Cheteshwar Pujara ensured to play safe as India ended Day 2 with 57/2. The visitors led by 70 runs after the end of the second day. Talking about India’s progress on Day 3, Proteas bowlers got off to a terrific start as they dismissed Pujara and Ajinkya Rahane quickly.

Pujara and Rahane were dismissed in the 18th and 19th over respectively. Marco Jansen got rid of Pujara for just 9 runs whereas Rabada dismissed Rahane for just 1 run. However, the best part of Day 3 was how Keegan Petersen took a catch to dismiss Pujara.

South Africa came up with a proper game plan to get rid of Pujara. They knew that Pujara would dictate terms especially in a situation like this. Dean Elgar was spot on with field placement as he decided to send Keegan Petersen at leg gully.

Proteas’ left-arm fast bowler Marco Jansen bowled a bouncer to Pujara and the latter decided to defend it. However, his defensive shot put him in the back foot as he hit the ball towards leg-gully thinking that he would hit a boundary but Keegan Petersen had other ideas.

He took the catch from an impossible angle as he put in a full-blooded dive to his right only to take the catch in one hand. Commentators were literally taken aback by Keegan Petersen’s sheer fielding brilliance. The video clip spread like wildfire on social media.

Rishabh Pant was the only fighter for India in the second innings. The southpaw scored an incredible century and that too at a faster rate. He scored an unbeaten 100 off 139 balls including six fours and 4 maximums.

India were bowled out for 198 and gave a target of 212 for Dean Elgar and Co. South Africa finished the third day with 101/2 and require 111 runs to win the game with 8 wickets in hand.