WATCH: Kagiso Rabada almost does an awkward celebration after taking a wicket; remembers ICC and then controls himself 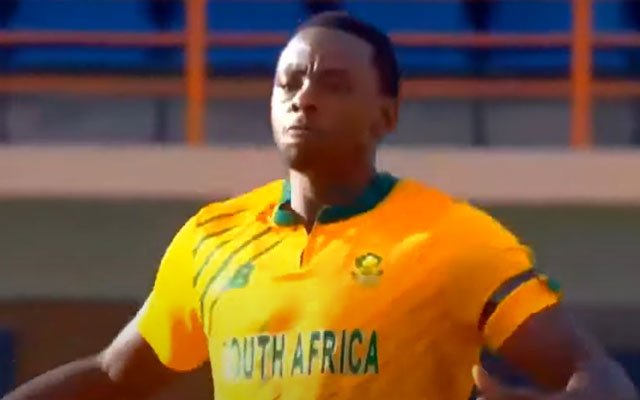 West Indies and South Africa are currently locking horns with each other in the five-match T20I series. The first three games have been done and dusted. West Indies won the first match by 8 wickets while the Proteas came back to stun the hosts with a 16-run victory.

Talking about the third match, South Africa batted first and managed to post 167 for the loss of 8 wickets in their quota of 20 overs. Quinton de Kock top-scored with 72 off 51 balls with the help of 5 fours and 2 sixes whereas Van der Dussen scored 32 off 24 balls including 2 fours and a six.

West Indies’ bowler Obed McCoy was the best performer of the game as he picked up 4 wickets in his quota of 4 overs, giving away only 22 runs at an economy of 5.50. Dwayne Bravo was the second-best bowler as he took 3 wickets to his name.

In reply, West Indies fought really hard with the bat and gave absolutely everything in the run-chase. They almost pulled off a heist but eventually, the Proteas won the game by a whisker of 1 run. There weren’t any big contributions from West Indies batsmen. Evin Lewis and Nicholas Poorna scored 27 each.

South African fast bowler Kagiso Rabada had a tough day at the office as he was tonk by West Indies’ batsmen to all parts of the park. He leaked so many runs and was under immense pressure already. In his quota of 4 overs, he conceded as many as 41 runs at an expensive economy rate of 10.20.

When Kieron Pollard, the dangerman and gamechanger came out to bat, he faced Kagiso Rabada. The ruthless pacer might have conceded too many runs but he bowled a peach of a delivery to dismiss Pollard.

Rabada made a complete mess of Pollard’s stumps and almost pulled off an awkward celebration but then again, he remembered ICC and controlled himself quite a bit. It was because ICC had given him a one-Test match ban very recently. The pacer was found guilty of being too animated in his celebrations.