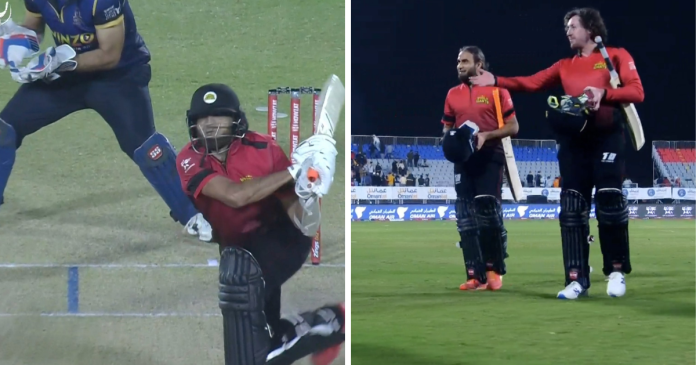 Imran Tahir stole the limelight in the Legends League Cricket but this time with the bat as the World Giants overrode the odds to beat India Maharajas by three wickets in Oman.

Asked to bat first, India Maharajas posted a mammoth total of 209 runs, riding on a century from Naman Ojha and a watchful fifty from Mohammad Kaif. While the top-order faltered, Ojha held the fort tight from one end and smacked everything that came his way.

He scored 140 from 69 deliveries, including 15 boundaries and nine towering sixes while Kaif remained unbeaten on 53 from 47 balls that included three sixes. Ryan Sidebottom was the pick of the bowlers for the World Giants, returning with 2/20 in three overs.

Chasing a towering total, the World Giants tottering at 130 for six in the 14th over before Imran Tahir’s arrival at number 8. Half-century from Kevin Pietersen and decent contributions from Brad Haddin and Darren Sammy put the Giants on the right paddle before India bounced back with wickets.

The India Maharajas then slipped from the brink of a comfortable win as Tahir slammed an unbeaten 19-ball 52 with five sixes, two of which came in the final over with the Giants needing 12 runs.

The veteran South African cricketer announced his arrival with two boundaries on the trot. He continued the onslaught alongside Morne Morkel (21 off 15) to stun the India Maharajas in a high-scoring encounter.

The fans were certainly pumped by Imran Tahir’s heroics with the bat. They showered praise on ‘batsman’ Tahir.

Here are some reactions:

My mother wants to check Imran Tahir's bat. She can't believe that he hit a fifty😂

One of the most comical finishes I’ve seen in a long time. Imran Tahir wins a game out of nowhere with the bat scoring 52*(19) for World Giants. #LegendsLeagueCricket

Unbelievable.. Imran Tahir has hit a 19 ball 50 to snatch victory from India.. seems like every South African under the sun has become superman against India.. and we were trolling KL Rahul when he said entire country is playing against India.. shame that we didn’t understand 😭 pic.twitter.com/51A15VxPrl