Watch: Bangladesh players take DRS despite the ball hitting the middle of the bat 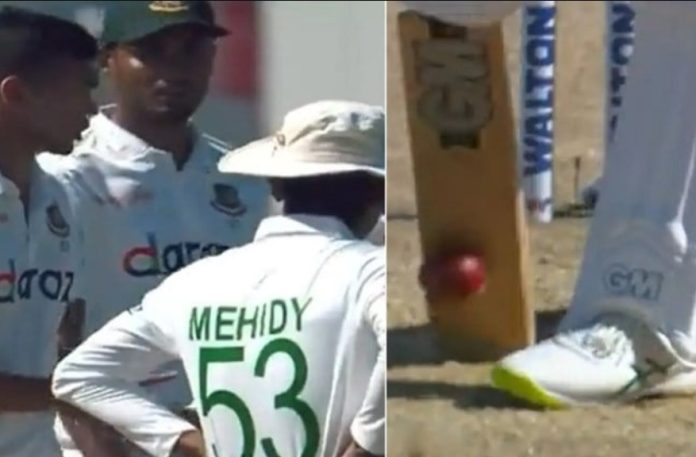 New Zealand are hosting Bangladesh in a two-match Test series. The first Test match is taking place at Bay Oval, Mount Maunganui. Batting first, New Zealand posted 328 in the first innings. Devon Conway was the pick of the batsmen as he scored 122 including 16 boundaries and a six.

In reply to the hosts’ total in the first innings, Bangladesh did manage to give a tough time to New Zealand with their cumulative batting efforts. Bangladesh captain Mominul Haque scored 88 including 12 fours whereas Liton Das scored 86.

The visitors came up with a proper game plan and executed it to perfection. They ended up posting 458 runs on the board with a healthy lead over the hosts. Meanwhile, New Zealand are fighting to extend a lead over the visitors at home.

Meanwhile, Bangladesh players became the talking point after they took the worst DRS call in the history of Test cricket. While they have taken so many weird calls so far, the one they took against New Zealand probably turns out to be the worst one in their history.

The incident happened during Day 4 of New Zealand’s innings when Taskin Ahmed was bowling to Ross Taylor. The fast bowler pitched in a full-length delivery and the veteran defended it in the first place. While the players made a full-hearted appeal, the umpire didn’t raise his finger since he was not interested in the shout.

Meanwhile, Bangladesh captain Mominul Haque surprisingly decided to go for the LBW review. The TV replay on the large screen showed that the ball it the middle of the bat. Even though the batter’s boot was close, the ball had missed it. The review turned out to be an absolute blunder from the visitors.

Bangladesh lost their last remaining review when THIS was given 'not out' for LBW!

New Zealand are leading by 17 runs and lost half of their batting line-up. Will Young top-scored with 69. Ebadot Hossain was the game-changer as he took 4 wickets to his credit. Ross Taylor and Rachin Ravindra are batting on 37 and 6 respectively.