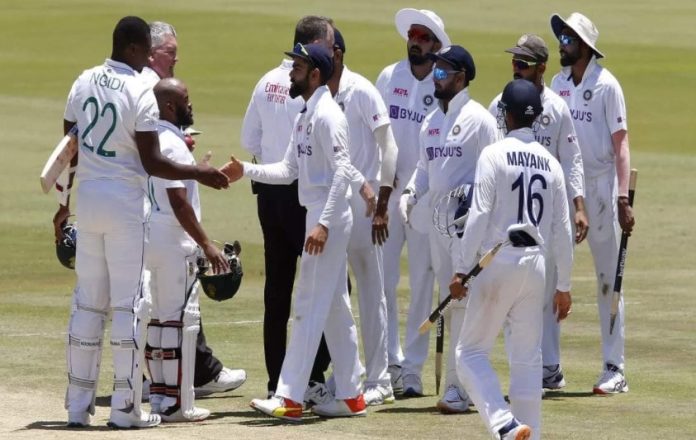 India‘s Test record in the rainbow nation is quite frightening. The fact that they won only three games in their just goes to show how Proteas dominated them to the fullest. Indians arrived in South Africa for a purpose and that is to conquer the South African soil.

They have conquered Australia, New Zealand and England but are yet to showcase their true strength against South Africa. Just before the toss of the first Test match, there was a sense of fear circulating in every nook and corner of the Indian cricket fraternity.

The tensions amplified to a great extent after India won the toss and opted to bat first in Centurion. While some praised Virat Kohli’s bold decision to bat first, another section of users mocked the captain’s decision saying that it is going to be the same old story.

However, Indians proved the critics wrong by scoring 274/3 on Day 1. KL Rahul’s century and Mayank Agarwal’s gritty fifty steered the team into the comfy zone. However, Day 2 was called off without a ball being bowled due to persistent showers.

Proteas pacers managed to get back into the game by bundling the Indians out for 327. Lungi Ngidi looked sharp and decisive with the ball as he took six wickets. In reply, Indians responded pretty well in the form of Mohammed Shami as the latter took a fifer.

Indian pacers reduced South Africa to 197 in the first innings. While India were all out for 174 in the second innings, they were still on top of the game, thanks to their 304-run lead. Chasing 305 is always going to be challenging even for a home team.

South Africans lost four wickets, scoring 94 runs at the end of Day 4. However, Indian pacers namely, Jasprit Bumrah and Mohammed Shami took 3 wickets each. Proteas were bowled out for 191 as India won the first Test by 113 runs. KL Rahul was named the Player of the Match for his impeccable century.

Starting the year at the Gabba and finishing it thus at Centurion is a mighty achievement. The WTC final was the only aberration in a great year of test cricket

I don’t remember team chasing 250 plus against india so it was always question of rain saving South Africa. Congratulations Team India for the new year gift!#SAvsIND #CricketTwitter

Centurion Conquered. In 3.5 days. Let’s convert this start into the first ever Test series win in South Africa. 👏👏 #SAvInd