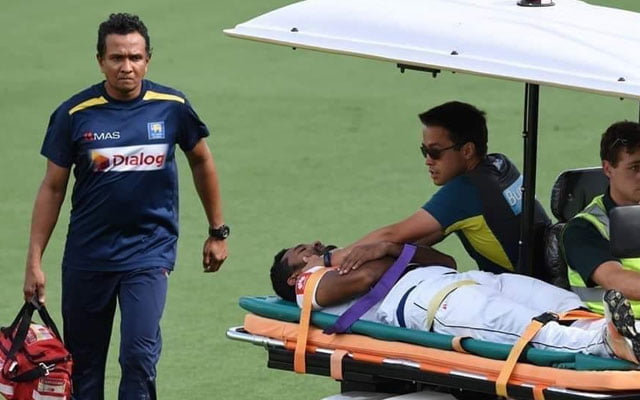 Fitness is a substantial parameter or a standard set by the respective cricket boards in the modern-day cricket. Back in those days, fitness wasn’t given the priority and the players were recruited based on their batting or bowling skills. As the years progressed, the cricket boards decided that it is best to make ‘fitness’ as a mandatory rule for playing vying for a spot in the national team.

One has to clear the fitness test in order to feature in the team. We have seen players getting injured very easily. It’s because they are not fully fit. However, the players who have cleared the fitness tests have maintained a good shape and also got rid of injuries. Meanwhile, Sri Lankan cricket team physio staff identified as Ajantha Wattegama came under fire for doing something against the ICC rule book.

Ajantha Wattegama has been sacked from the post with immediate effect after being accused of hiding original fitness reports of Sri Lankan players. Meanwhile, everything is not going smoothly for Sri Lankan national cricket team at the moment. Just a couple of days ago, significant decisions were taken under the national sports minister’s guidance in a bid to revamp Sri Lankan team altogether.

Sri Lanka’s on-field performances at home and away has been poor. They were handed a 2-0 humiliating defeat by ruthless England at Galle. The hosts had no clue to fight against the visitors as they lost consecutive Tests in a row for the first time at Galle.

It is sad to see players failing to protect their crumbling Galle fortress as England players breached it quite comfortably. Sri Lanka’s terrible performances against England raised a lot of questions in and around the team. One of the important things is the fitness level of players as around 10 players were injured in the last one month.

Sri Lanka’s physiotherapist Ajantha Wattegama has been taken off from the post. Aravinda Jayadewa has taken over his position and will ply his trade as the new physio staff in the team. Meanwhile, the official press release from the Sri Lankan Cricket Board will be released anytime soon.

As per close sources, Wattegama was axed from the post as he was being part of hiding the fitness reports of the Lankan players. The source also goes on to add saying that he was involved in some other wrong things around the team, which are yet to be disclosed. It is cognisance of the fact that the fitness level of players has been a huge setback for Sri Lankan cricket in recent times.

During their last visit to South Africa, there were plenty of injuries in the tour. In the first Test, as many as 3 Lankan players walked off the field due to injuries. In the recent information from the sports minister, there are necessary steps to be taken to meet the fitness levels of cricketers.