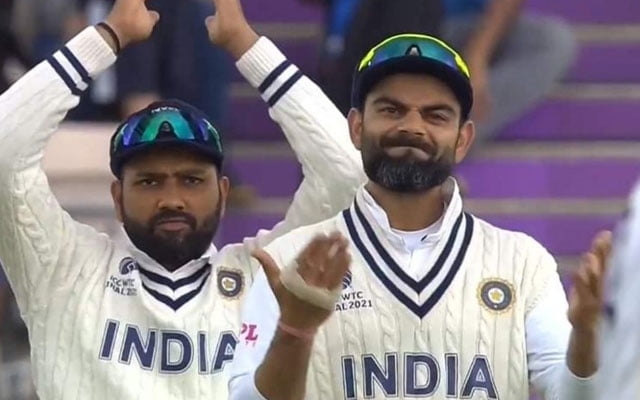 In an era where social media is dominating the world, people often get to hear two sides of the same story. While a certain section of users speak positively about the story while the other section does quite the opposite. This happens when a tweet or a picture is blown out of proportion.

We have seen time and again that some people deliberately spread fake news just for their own satisfaction. It is quite common in Indian cricket that fans generally don’t like the other player when they are inclined towards one specific star. For instance, Rohit Sharma fans may not like Virat Kohli.

On the other hand, Kohli fans may not like Rohit Sharma. Recently, a picture circulated the rounds on social media portals showing how Virat Kohli and Rohit Sharma reacted to Jasprit Bumrah. As per the picture, it clearly revealed that Kohli showed some frustration on the right-handed pacer.

Bumrah hardly made any difference on the pitch as he remained wicketless in his quota of 11 overs. As picture suggests Kohli getting frustrated with Bumrah, then there is Rohit Sharma standing right behind Kohli encouraging Bumrah by clapping.

Soon after the picture circulated online, people started to judge Rohit and Kohli, calling that this is the subtle difference between a captain and a leader. However, the social media users were misinformed as they only got to know about one side of the story.

As per the picture, Kohli apparently seems frustrated, but in reality, he was only telling Jasprit Bumrah that there is a massive inside edge. The 33-year-old stalwart can be seen explaining to the bowler why they should not take a review for the same. It was at that time when Rohit was seen lauding the bowler for efforts.

Talking about the game, New Zealand are in firm control over the game with 101/2. The fourth day of the WTC Final was abandoned due to rain, which means there are only two more days to determine the end result of the game. If rain gods keep appearing time and again, then Virat Kohli and Kane Williamson would have to share the trophy.