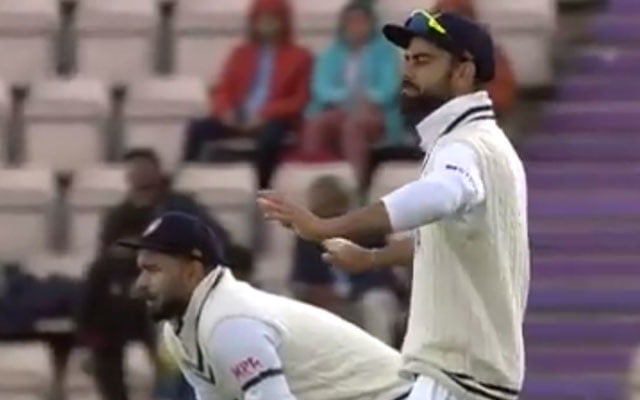 Indian captain Virat Kohli is an animated character by nature. He is a person who displays raw emotions on the field. Whenever something interesting happens on the field, the cameraman knows exactly what he needs to do to show the viewers. He straightaway pans the camera on the Indian captain for his antics.

The cricket fraternity has witnessed Virat Kohli displaying anger, frustration, happiness, sadness and all other emotions depending on the state of the match. During the inaugural edition of the ICC World Test Championship Final between India and New Zealand, Kohli was caught on camera showcasing some of his Bhangra moves.

The ICC WTC Final is being held at The Rose Bowl in Southampton. The first day was washed out due to rain. However, the rain gods showed mercy on the players and fans on the second day. The toss and game started on Day 2 with Kiwis winning the toss and opting to bowl first.

The fans witnessed a spectacle between the two teams. However, India managed to score 146/3 before bad light stopped play. On Day 2, India were bowled out for 217. New Zealand got off to a fantastic start in the form of Tom Latham and Decon Conway. The duo added a 70-run partnership.

Ravichandran Ashwin provided Team India with a much-needed breakthrough as he got rid of him in the 35th over. Latham departed after scoring 30. Conway responded with a brilliant half-century but was dismissed by Ishant Sharma in the 49th over.

New Zealand captain Kane Williamson and Ross Taylor are batting on 12 and 0 respectively. During the game, it was good to see Indian fans cheering up for their players at The Rose Bowl. The crowd was electrifying as they made massive noise. While they rolled out the dhol, the Indian captain couldn’t resist himself as he displayed supercool Bhangra moves.

The Indian captain scored 44 in the first innings whereas his deputy Ajinkya Rahane top-scored with 49. Kyle Jamieson was the pick of the bowlers for New Zealand as he registered a fifer to his name.