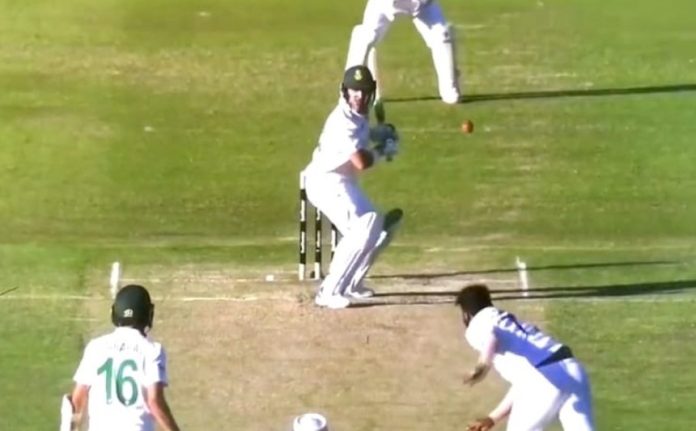 Indian Test captain Virat Kohli is quite an animated character on the cricket field. Every now and then, he finds new ways to entertain the audience. The cameraman literally knows what to do when something really interesting or serious thing happens on the field.

The first thing he does is pan the camera on Virat Kohli to record his instant reaction. During the first Test match against South Africa, the skipper was spotted unleashing some dance moves. The video clip of the same went viral on social media channels.

Meanwhile, yet another incident happened during the fourth day of the Test match that took the Indian players and commentators by surprise. It happened when South Africa were at 75/3 with Dean Elgar and Keshav Maharaj at the crease.

During the second ball of the 38th over, Mohammed Siraj tried to deliver a short-pitched ball to left-handed batsman Dean Elgar. Although Siraj’s intention was right, his execution went totally wrong as it turned out to be a slower delivery.

This is also probably the slowest ever delivery bowled by Siraj in his career. Meanwhile, Elgar sensed this as a perfect opportunity and smacked the red cherry for a boundary. Just as when the ball crossed the boundary rope, Kohli was spotted laughing.

Soon after Dean Elgar sent the ball to the boundary, Kohli was seen giggling at Siraj’s delivery. Later on, Jasprit Bumrah zeroed in on at Proteas batters with an aim to get a wicket in the fag end of the overs of the fourth day’s play.

Bumrah and Shami took three wickets each. Ravi Ashwin and Siraj took 2 wickets each. India scripted a historic win at Centurion as they won by 113 runs. KL Rahul was named the Man of the Match for his 123 in the first innings.