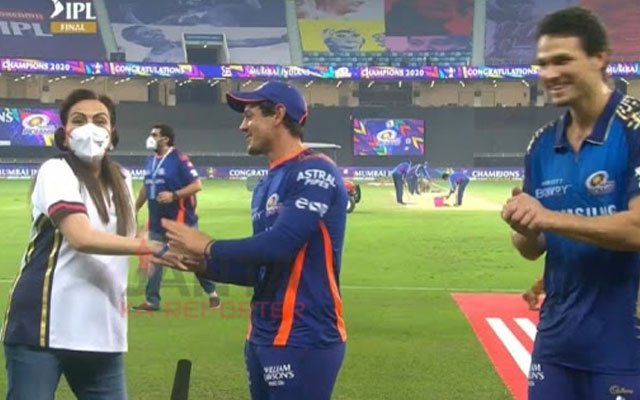 They have played six IPL finals and have won 5 titles. Mumbai Indians won the title in IPL 2013, 2015, 2017, 2019 season. This franchise won titles only in odd seasons. However, for the first time in their history, they defended the title and broke the odd number jinx and made their fans believe that they can win the title in even season as well.

Chennai Super Kings were the first team to defend their title in IPL 2010 and 2011 season. After more than a decade of IPL cricketing action, Mumbai Indians successfully managed to do it with a strong and well-balanced team led by Rohit Sharma.

Mumbai Indians owner and Mukesh Ambani’s wife Nita Ambani made the headlines recently when she crashed the interview that happened between Quinton de Kock and Nathan Coulter-Nile. After the IPL final, both the stalwarts were being interviewed by the broadcaster while Mumbai Indians owner was going around applauding the players for the historic triumph.

When Nita Ambani saw both the players standing together, she went up to them only to congratulate on the title victory. Nonetheless, she didn’t take much time to realise that the two players were giving interviews. She addressed the South African wicket-keeper batsman and then walked up to him only to congratulate him on the title win before actually spotting the microphone.

Meanwhile, the players and commentators couldn’t control laughter soon after she said: “Quinton!!! Oh, are you giving an interview?”. It was when the New Zealand commentator Simon Doull asked Nita Ambani to stay but she walked away from the spot.