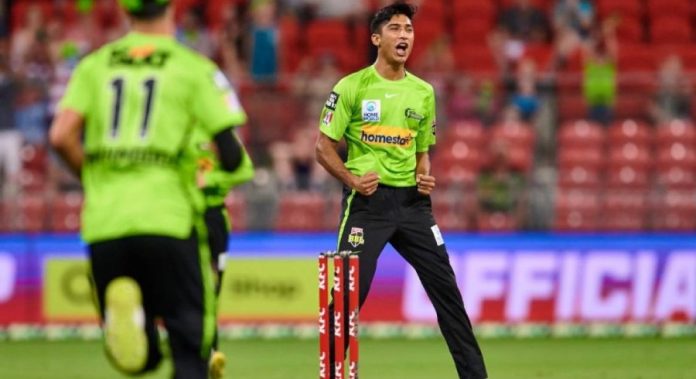 Pakistan pacer Mohammad Hasnain has been banned from bowling after biomechanical testing in Lahore confirmed his action was illegal. Meanwhile, it was first reported during a stint with the Sydney Thunder last month in Australia.

The testing that took place on January 21 revealed that Hasnain breached the ICC’s 15-degree limit for elbow extension on his good length delivery, full length delivery, slow bouncer and bouncer.

With the ongoing ban, Mohammad Hasnain will miss the upcoming home series against Australia and has also been banned from bowling in the Pakistan Super League (PSL). He will now work on a remodeled action before seeking a clearance to resume bowling once again.

Mohammad Hasnain out of cricket due to his bowling action. Disappointing it's taken this long to discover any issue and reported in a T20 domestic tournament rather an international series. #Cricket #ICC #MohammadHasnain

Pakistan Cricket Board said that they will appoint a bowling consultant who will work closely with Mohammad Hasnain to rectify his action.

“The PCB has discussed the report with its own bowling experts and is confident that the problem can be resolved. The PCB will now appoint a bowling consultant who will work with Mohammad Hasnain so that he can rectify his bowling action and be ready for a reassessment,” a PCB statement read.

“Hasnain is an asset for Pakistan and one of the very few bowlers to consistently click 145kph. As such, and keeping his future and Pakistan’s interest at the forefront, the PCB, on the recommendation of the HBL PSL 2022 Technical Committee, has decided he will not be allowed to continue to participate in the HBL Pakistan Super League.

“Instead, he will use this time to work with the PCB-appointed bowling consultant to modify his bowling action so that he can apply for a reassessment and become eligible to return to international cricket as quickly as practically possible,” the statement added.

Mohammad Hasnain’s bowling was reported by umpire Gerard Abood after his BBL debut with the Thunder on January 2. So far, he has played eight ODIs and 18 T20I games, picking up 29 wickets combined including a five-wicket haul.