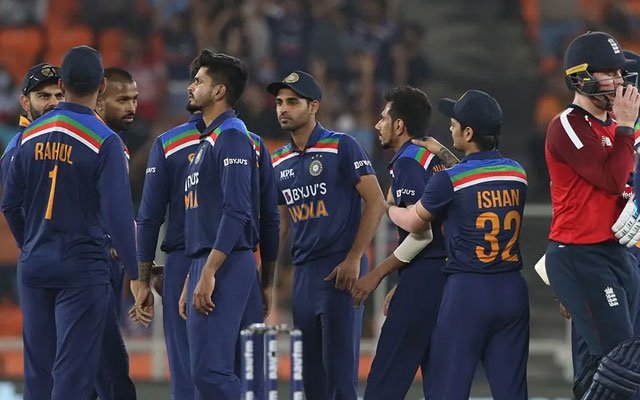 An over rate in cricketing terms is nothing but the average number of overs bowled each hour by the bowling team during the game. In international cricket, bowling teams are expected to complete a minimum over rate. The teams that failed to achieve the target i.e. the minimum over rate had had points docked.

Besides that, the players will also be fined some part of their match fees for failing to abide by the norms. As far as the shortest format of the game is concerned, bowling teams are supposed to bowl their full quota of 20 overs in 1 hour 25 minutes.

Calculating this, the total time is analogous to a minimum over rate of 14.11 overs per hour. In the latest news, Virat Kohli-led Indian cricket team have been fined 20% of match fees for slow over-rate. The apex body has been monitoring all the activities, game time and so on.

They learnt that Indian players maintained a slow over-rate in the second T20I against England at Narendra Modi Stadium in Ahmedabad during Sunday’s encounter. So, the international cricket body (ICC) imposed a 20% fine for Team India players.

The penalty was imposed by none other than former Indian cricketer and current match referee Javagal Srinath. It was learnt that Team India were ruled to be one over short of the target after time allowances were taken into analysis.

“In accordance with Article 2.22 of the ICC Code of Conduct for players and player support personnel, which relates to minimum over-rate offences, players are fined 20 per cent of their match fees for every over their side fails to bowl in the allotted time,” said ICC in a statement.

Team India suffered a defeat at the hands of England in the first encounter at the world’s largest cricket stadium. England won the first game by 8 wickets with ease and took the opening lead in the five-match T20I series. Jofra Archer was named the man of the match for his 3/23.

However, Team India made a solid statement in the second T20I against England. They restricted the England side to 164 and chased down the target inside 18 overs. India won the game by 7 wickets and levelled the series 1-1. The third T20I will kick-off at the same venue on March 16 (Tuesday).