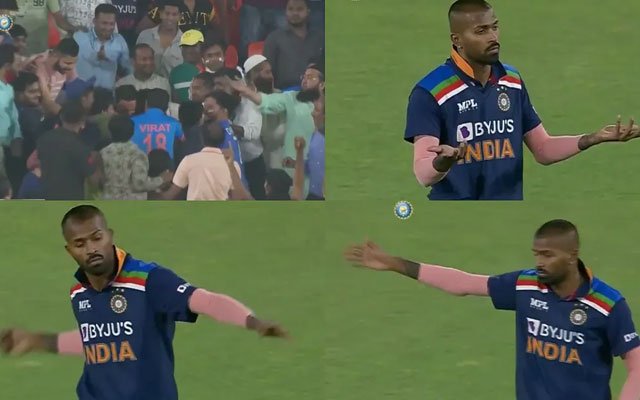 India’s big-hitting all-rounder Hardik Pandya made a comeback in the first T20I match against the No.1 ranked England side at Narendra Modi Stadium in Ahmedabad. His comeback was far from pleasing as he hardly delivered the goods for the Indian national cricket team.

The 27-year-old Baroda cricketer was expected to take the bowling attack to the cleaners. But the England bowlers tried their maximum best to keep the all-rounder silent. First of all, there was never a contest right from the toss as India failed to start the game well.

The first half of the batting line-up didn’t live up to the expectations as Shikhar Dhawan, Lokesh Rahul, Virat Kohli, Rishabh Pant departed without making an impact. Shreyas Iyer was the lone warrior in India’s innings as he perfectly assessed the conditions to better effect.

Shreyas scored 67 off 45 balls where he smashed as many as 8 fours and a six. After his departure, it was expected that Hardik Pandya would mount the pressure on England. But as it happened, Hardik didn’t last long as he only played 21 balls. He could score just 91 runs at a strike-rate of 90.

India managed to set up a target of 125 for the visitors. England’s opening pair Jason Roy and Jos Buttler killed India’s confidence from the word go by smashing sixes and fours at will. They easily took India’s bowling attack to the cleaners with exceptional hitting.

During the fifth over, Jos Buttler shimmied down the ground only to hit a six off Axar Patel. In the process, the ball crossed over the fence at a long-on region but the fans took some time in returning the ball to the Indian fielders. As the game got delayed for a moment, Hardik Pandya lost his cool.

The cameras were panned onto the all-rounder where he can be seen showing his frustration at the fans for delaying the game. The entire incident was caught on camera and the video went viral on the internet. Indians managed to take just two wickets during England’s innings.

Jos Buttler was dismissed LBW off Yuzvendra Chahal as the former departed after scoring 28 off 24 balls including 2 fours and a six. Jason Roy was the top batsman for England as he scored 49 off 32 balls including 4 fours and 3 sixes. England won the game by 8 wickets. The visitors took a 1-0 lead in the series.