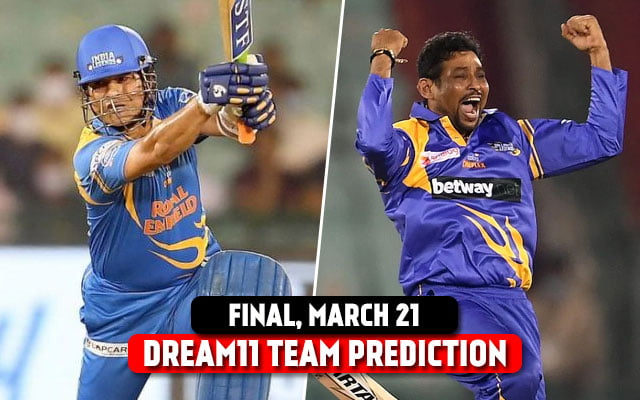 The final of the Road Safety Series will be played between India and England on 21st March at Shaheed Veer Narayan Singh International Stadium, Raipur.

The match is scheduled to start at 7:00 PM local time IST and it will be telecasted live on Colors Cineplex, Jio Cricket, Rishtey Cineplex, Colours Kannada Cinema, and also on Voot.

India Legends will take on SriLanka Legends in the Final match on 21st March. Both the teams have done exceptionally well throughout the series and that’s why they are rightly at the top of the points table.

India Legends have won five out of six matches but the job is not yet done. They have really good chances to win the final. Their batters have to perform really well to set a good total because their bowling department is not that lethal. They will come as favourites in the match.

It is expected to have a clear sky and we can expect a full match. The humidity is expected to be 57 per cent. There are chances of dew in the second innings. The temperature would be hovering around 27 to 29 degree Celsius.

Last time some IPL matches were played on this ground. The pitch looks balanced. The average first inning score is 146. The pitch helps the chasing team a little more. It is highly anticipated that whoever wins the toss would go for bowl first as dew will play an important in the latter half of the match.

Virender Sehwag: We know how destructive he can be if he gets his day. He can kill the match there only. Opposite teams always want to out these kinds of players as quickly as possible. In last six matches of this series, he has scored 204 runs with a strike rate and average of 160.63 and 51 respectively.

Tillakaratne Dilshan has been proving himself as the best all-rounder from Sri Lanka side. In 7 matches, he has scored with a strike rate and average of 138.9 and 50 respectively. He has also picked up 12 wickets as well.

Sachin Tendulkar: He has to perform and have to be right till the end if India wants to win this match. In six matches of this series, he has scored 203 runs with a strike rate and average of 140+ and 40 respectively.

Chamara Kapugedera has played only two matches so far but he can very dangerous if he gets going. In two matches, he has scored 51 runs with a strike rate of 145+.

Munaf Patel: He is the one bowler who can beat batters with his line and length. It does not have much pace but focuses on hitting the right area. He has picked up 8 wickets in six matches he played in this tournament.

It is advisable to pick Tillakaratne Dilshan in your Dream 11 Fantasy team.

India Legends are expected to win this match.