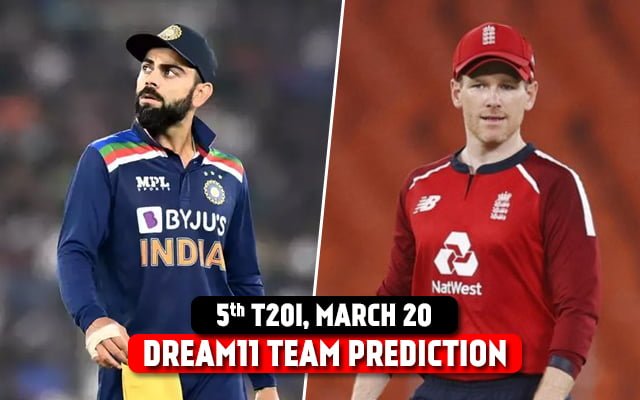 The 5th T20I match between India and England will be played on 20th March at Narandra Modi Stadium, Ahmedabad.

The match is scheduled to start at 7:00 PM local time IST and it will be telecasted live on Star Sports Network and will be streamed online on Disney+ Hotstar.

India will take on England in the 5th T20I match on 20th March. From the last T20I, it is clear that it is not about winning the toss and win the match. If a team can set a good total then it is defendable. The series has come to an interesting end. This match will decide who will get the T20I series.

This win can be a huge phycological boost for both the teams before the T20 World Cup which will happen in India only this year. England is at the top of the ranking in the ICC points table and is considered as one of the best T20 sides and they would love to continue that reputation.

On the other hand, India is the 2nd topmost team in the ICC points table and they are very hard to beat at their home. It will be an interesting contest between bat and bowl.

If we look at the last four T20I matches at this pitch, it helps the teams who are batting second. Chasing is a little bit easy due to the dew factor. But that did not happen in the last match. A good score can be defended on this pitch. But still, it is highly likely that whoever wins the toss would prefer to bowl first.

KL Rahul has not impressed in this series so far. He has only scored 15 runs in four matches but we all know how destructive he can be with the willow. His best performance is due for the final match.

Jason Roy has one of the most consistent batters from England side in this T20I series. He has scored 144 runs in 4 matches with a strike rate and the best score of 134.57 and 49 respectively. He can be a good pick for your team.

Surya Kumar Yadav got his first match after a long wait and that was a dream start for him. He scored 57 runs with a strike rate of 183.87. In the first match, he showed the confidence he gained throughout the IPL and did not look nervous at all. He will be eager to make every match count.

Rohit Sharma‘s bat has been silent for the last two matches. He scored only 27 runs but we all know if he gets going then he can win you the match single-handed. His best performance of the series is yet to come.

Dawid Malan is one of the best T20I batters. He has played so many excellent innings for England but in this series, he has not performed up to his expectations. He only scored 80 runs in four matches. He can win you matches if he gets going.

It is advisable to pick Surya Kumar Yadav in your Dream 11 Fantasy team. It is also advisable to pick more batters from both sides. Bowlers have not been that exceptional who can win you a lot of points in one go.

India are expected to win this match.

Follow Fantasy Cricket Tips for all the latest Cricket fantasy tips and predictions.