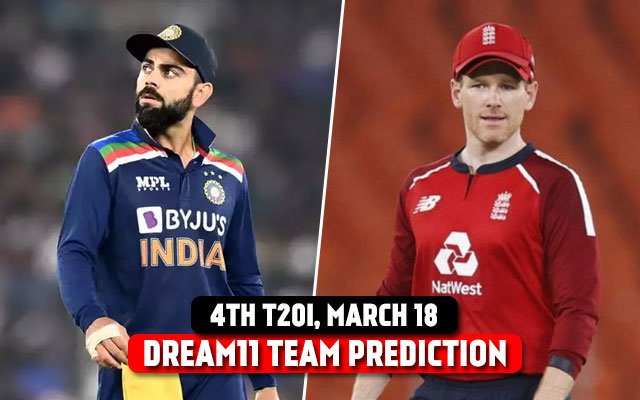 The 4th T20I match between India and England will be played on 18th March at Narendra Modi Stadium, Ahmedabad.

The match is scheduled to start at 7:00 PM local time IST and it will be telecasted live on Star Sports Network and will be streamed online on Disney+ Hotstar.

India will take on England in the 4th T20I on 18th March. If we remove the importance of toss then both the teams are looking equally strong.

India had a lot of home advantage during the test series but in the T20I series, they have to work really hard to get a win. This match is do and die for India as if they lose it, they would lose the series. They have to get their playing eleven fixed.

There would be some broken clouds but no chances of rain. The humidity is expected to have 19 per cent. The temperature would be hovering around 39 degree Celsius.

According to the last three T20 international matches, the pitch helps a little more to the chasing team. The ball comes really well to the bat. It is highly likely that whoever wins the toss would prefer to bowl first. Toss would be a very important factor.

Jos Buttler – We all know how destructive he can be. He is the second leading run-getter in the series so far by scoring 111 with a strike rate and an average of 144+ and 55+ respectively. In the first two matches, he did not perform well but in the last match, he played a match-winning knock of 83 runs not out.

Rohit Sharma – One of the best T20 players in the world right now. If it is his day then nobody can take the win out of India’s hand. He played only the last match where he did not perform up to the expectation but would be eager to score good runs for his team.

Virat Kohli – He is in fantastic form. He is the leading run-scorer so far in the series. In 3 matches, he has scored 150 runs with a strike rate and an average of 150 with the highest score of not out 77.

Jason Roy – He has been magnificent for England in T20 format. In the first match of this series, he played a knock of 49 runs and gave a good start to his team to chase down the target.

Rishabh Pant – Last few months have been very fruitful and exciting for Rishabh Pant. He has become an important player for Men in Blue. He has smashed some runs in this series but his best is yet to come. He can be very dangerous as anybody else.

India are expected to win this match.