HomeCricket VideosICC brutally trolls Hasan Ali on Twitter after the fall of his...
Cricket VideosSocial Bouncer 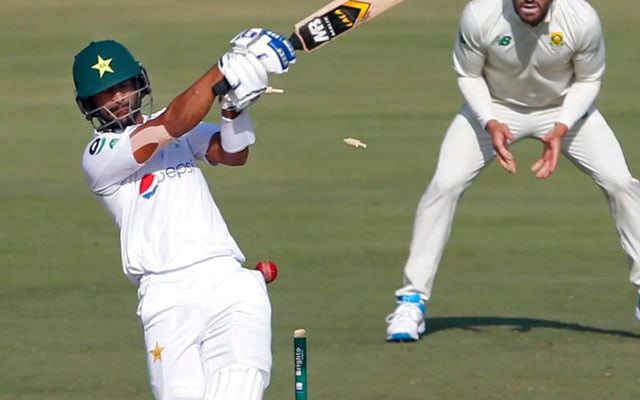 The first Test match between Pakistan and South Africa is currently being staged at National Stadium in Karachi. South Africa skipper Quinton de Kock won the toss and elected to bat first. A lot was expected of South Africa in the batting line-up. However, the Proteas couldn’t bring the best out of themselves in the first innings as they were bowled out for a modest total of 220.

Dean Elgar was the top-scoring batsman for South Africa as he chipped in with 58. Yasir Shah turned out to be the best bowler for Pakistan as he took 3 wickets to his credit. In the wake of a terrible batting display, the visitors bowled really well as they took 4 quick wickets on opening day. Kagiso Rabada and Keshav Maharaj took 2 wickets apiece as Pakistan were stuttering at 33/4 on Day 1.

However, they looked like a different batting unit altogether when they resumed the play on Day 2. Fawad Alam stunned the visitors by taking the bowling attack to the cleaners and went on to score a wonderful century. Faheem Ashraf was the other batsman who played well against South Africa. He scored 64 to his name. After his departure, Hasan Ali came out to bat to face the music.

Just like every individual cricketer, Hasan Ali looked good with the bat as he scored 21 off 33 balls. He also hit 2 fours to his name. While he was looking to extend the lead, his innings was put to a close by South Africa fast bowler Kagiso Rabada. The right-arm fast bowler stuck to his bowling variations of good line and length and sent Hasan Ali’s middle stump for a walk.

After Hasan Ali departed, ICC decided to troll him on social media, but in a constructive manner. ICC posted two pictures featuring Hasan Ali. As far as the first picture is concerned, Hasan can be seen playing a pull shot. Meanwhile, the fans thought that he played a boundary as the first picture resembled in that manner.