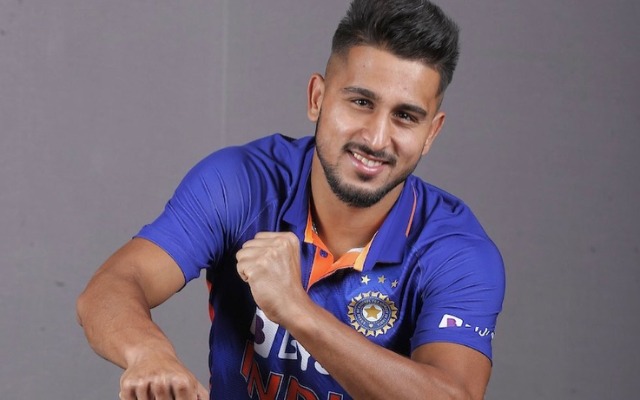 It’s true that people’s obsession with pace bowling has increased in the past few years, as speed is fascinating to watch just like power-hitting done by batters. The audience likes to watch bowlers bowling at gun speed, which makes life tougher for batters at the crease.

Earlier, India used to lack in terms of pace bowling when compared to the likes of Australia, West Indies, Pakistan, etc. Only a couple of Indian bowlers could clock around 150 km/h, which was a regular thing for many bowlers across the globe.

But the situation has changed over the past few years, with India producing many names who can consistently hit 150-mark and fit in fear in the minds of the batters. In this article, we look at the list of fastest Indian bowlers:

Umran Malik, who came in as a replacement of covid-19 positive T Natarajan, caught the attention of everyone in an encounter between Sunrisers Hyderabad and Royal Challengers Bangalore in IPL 2021. He bowled five consecutive balls which clocked over 150 km/h and left everyone speechless.

Looking like a long-term investment, SRH retained him at the 2022 auction and gave him a regular spot in the team. While playing against Delhi Capitals at the Brabourne Stadium in Mumbai, he hit 157 km/h, the highest speed ever reached by an Indian bowler till date.

Although Irfan Pathan was mainly famous for his swinging ability with the new ball, he stands second on the list of fastest bowlers in India. He had the special ability to swing the new ball in both directions, making it hard for a batter to guess the swing and play on merit.

The left-handed pacer clocked 153.7 km/h against arch-rivals Pakistan in the 2007 T20 World Cup, which India eventually won. He had a phenomenal campaign as he picked up 10 wickets in six innings at an economy of just 6.77.

Mohammed Shami is one of the greatest fast bowlers the country has ever produced. He has almost everything under his hat, be it pace, swing, or accuracy. When he is in rhyme, it’s tough for any batter in the world to play him. However, in recent years, he has cut down his pace a bit and has focused on his line and length.

Shami produced a 153.3 km/h delivery in a Test match against Australia in 2014 at Melbourne Stadium. He had a brilliant outing in the series, picking up 15 wickets in three games.

Despite being 28, Jasprit Bumrah is already one of the greatest Indian bowlers to have ever played the game of cricket. He is arguably the most complete bowler in the modern era. He can bowl at any stage of the game and is effective across all formats. That’s why he is the leader of the Indian pace attack.

The unorthodox pacer bowled a 153.2 km/h delivery during the first Test match of the 2018 Border-Gavaskar series. He ended the series with 21 wickets to his name and India went on to win the highly-anticipated series for the first time in their history.

Navdeep Saini did burst onto the scene for his speed and pinpoint yorkers. He became an integral part of Royal Challengers Bangalore and even clocked 152.8 in IPL 2019 against Mumbai Indians.

But he later became injury prone, eventually losing his spot in the team. Since then, he hasn’t been up to the mark as he has leaked runs at an alarming speed in white-ball cricket. He is currently not in the setup of the Indian national team.

Six Sixes in An Over: Know the Complete list

Most sixes in T20 Internationals: Rohit Sharma tops the list