Sachin Tendulkar’s daughter Sara Tendulkar has come up with a heartfelt post for her younger brother Arjun Tendulkar after the latter didn’t get an opportunity for Mumbai Indians in the final game against Delhi Capitals.

Mumbai Indians had the worst-ever season in their history as they finished at the bottom of the points table with just four wins in fourteen matches. The five-time champions tried everything throughout their season by trying different combinations. After getting eliminated early in the tournament, Mumbai Indians gave almost every player game time, keeping the next season in the sights. However, the fans were left red-faced as Sachin Tendulkar‘s son Arjun Tendulkar failed to make it to the playing XI against Delhi Capitals.

Arjun’s sister Sara Tendulkar was also present in the stadium supporting the Mumbai Indians in the final game of the season. She hoped that her brother would finally get a game for the five-time champions but even Sara was left disappointed.

Arjun is a part of the Mumbai Indians’ squad for the last two seasons but he has warmed the bench in both seasons. In the final game of the season, the young all-rounder could be seen helping his teammates from the boundary with the water bottles and the change of bats.

While Arjun was roaming around the boundary, Sara Tendulkar recorded a video of her brother from the stands and posted it on her Instagram story with a song from the movie ‘Gully Boy’ – Apna Time Aayega. 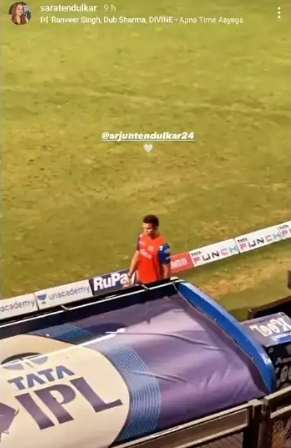 Meanwhile, the five-time champions finished their season on a high by defeating their arch-rivals Delhi Capitals by 5 wickets in the final game. Mumbai Indians’ win has eliminated Delhi Capitals from the IPL 2022 and Royal Challengers Bangalore has qualified for the playoffs. The Blues now will look to address their issues in the off-season and will look to come back strongly the next season.