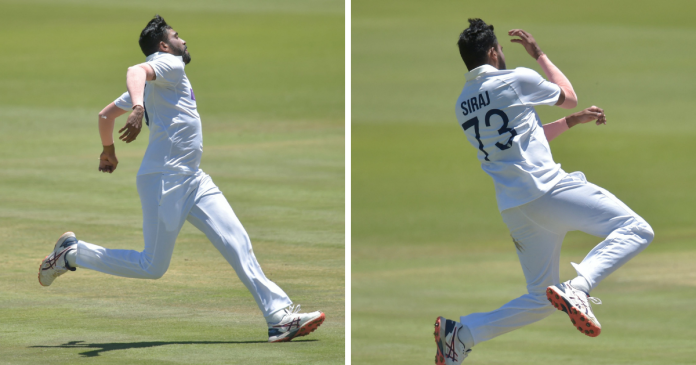 Starting the day at 272/3, South Africa bowlers triggered a collapse as they bowled out the visiting side 327 runs. Overnight batters KL Rahul managed to add one more run to his tally while Ajinkya Rahane added eight more. Lungi Ngidi finished with six wickets while Kagiso Rabada ended with three wickets.

With the wicket offering some assistance to the bowlers, India’s Jasprit Bumrah drew the first blood in the first over dismissing South African captain Dean Elgar before Mohammed Shami cleaned Aiden Markram and Keegan Pietersen. Reeling at 30/3, the hosts were in dire need of a partnership but Rassie van der Dussen’s 18-ball stay ended after he found Ajinkya Rahane at the gully region off Mohammed Siraj.

It was a fuller delivery from Siraj that drew van der Dussen across on the front foot. The ball takes the edge and goes low to gully where Rahane takes a smart catch before Mohammed Siraj produced his Ronaldo-like celebration.

With 32/4 and in deep trouble, Quinton de Kock and Temba Bavuma managed to revive South Africa’s innings before the Proteas wicket-keeper dragged one of Shardul Thakur. Bavuma continued to lead the fight with a valuable half-century but Mohammed Shami looked unplayable as he once again brought the home side on their knees.

Kagiso Rabada and debutant Marco Jansen chipped in with crucial contributions before Indian pacers bowled out South Africa for 197 runs to secure a 130 runs lead.

At stumps on day 3, India are at 16/1 losing the wicket of Mayank Agarwal in the last over of the day’s play.