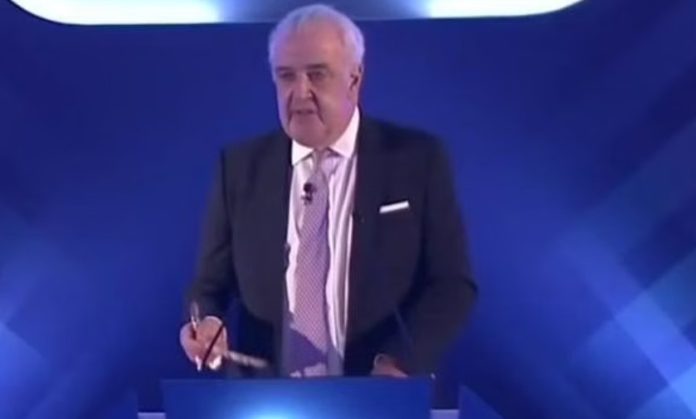 IPL auctioneer Hugh Edmeades kick-started the mega auction today in Bangalore. Shikhar Dhawan was the first marquee player who was sold on the first day. He was also the first player to be sold ahead of the new season. Punjab Kings recruited the services of the experienced campaigner for Rs 8.25 crores.

All 10 marquee players were sold in the first hour of the mega auction. As time progressed, an unexpected incident happened during the bidding process. IPL auctioneer Hugh Edmeades passed out during the IPL 2022 mega auction.

The incident happened when there was an intense bidding war for Sri Lanka’s bowling all-rounder Wanindu Hasaranga. RCB franchise was leading the race at Rs 10.75 crore. As per the sources, Hugh Edmeades suddenly fell unconscious and was quickly attended to by the medical team.

A late update from the mega auction clarified that Hugh Edmeades is doing just fine. A BCCI official on the condition of anonymity said that the doctors are keeping a tab on him. The official further added that Charu Sharma has been brought in as an alternative for the time being.

For the unversed, Charu Sharma has experience in conducting auctions. “Since the doctors are monitoring him, it has been decided to bring in Charu Sharma as an alternative. Charu has previous experience of holding auctions across disciplines,” a BCCI official added in a statement.

In December 2018, Hugh Edmeades flew to Jaipur for the IPL auction, in what totally a new experience for him. Despite the fact that he has conducted more than 2,500 auctions across the world so far, it was his maiden stint with Indian cricket.

Earlier, in a chat with InsideSport, Hugh Edmeades said, “During my 38 years as an auctioneer, I have taken plenty of two-day auctions, but admittedly, none lasting a potential 12+ hours.

“However, I am not at all fazed by the prospect of being on my feet for up to six hours each day. Mentally and physically, I will be splitting the sessions into “bite-size pieces” and taking the opportunities to regroup during the breaks in the auction.”