A batsman you cannot compare to the silky stroke makers of the class of Mark Waugh, Younis Khan or VVS Laxman. A stroke-maker far from the league featuring Dravid, Md. Yousuf or Jayawardena. Nonetheless, a batsman of resolve, a bowler with a knack of taking wickets regularly, and above all, an all-rounder who’s made his presence felt but hasn’t yet really blossomed as much as he’d like.

The Roston Chase conundrum, if at all one were to consider such a thing as being real instead of treating it as a non-issue, is that there’s rabid uncertainty about his next Test score. This is both strange and undesirable since there’s little doubt about the tall Barbadian’s talent. “Can he make a decent score?” “Can he stick around and not just stick around, but make runs while he lasts?”

These aren’t attention-grabbing headlines but realistic desires of fans who wish to see a committed and honest man punch above his weight. In 2016, when India came calling in the Caribbean with Kohli, Pujara, Rahane, Ashwin, Shami, and Dhawan as the stars, the Indian team didn’t just meet the Windies in the Second Test at Jamaica; they ran into a tall, immovable creature on the 22 yards.

His name-Roston Chase. His contribution- 137 solidly crafted runs in a very Chanderpaul-meets-Dravid fashion that was so desperately needed. His venue- Jamaica.

In an age where the tiniest pixel that makes up the human face can be zoomed and looked into and every minute detail of a ball be rewinded, a match-winning moment be looked at, again and again, perhaps it’s only fitting to revisit the moment that marked the arrival of Roston Chase since he’s being critiqued.

And it may only make sense to revisit a time where Roston Chase seemed a subject of unblemished heroism of West Indian cricket, the next go-to Test force to go to, before irresponsible stroke play and loss of concentration came to define him.

India had made lots of runs, batting first at Kingston, which to many, is Chris Gayle-land. Rather, a mountain of runs: 500 of them in the first-inning. Despite having Kraigg Brathwaite, Jason Holder, Marlon Samuels and Darren Bravo, the team never looked like reaching a 300 on the board.

Not that there was a dearth of talent, but the old clumsy West Indian habit of not putting up a strong fight came to the fore. Though that wasn’t the only thing that did in a game where the hosts were bundled out for just 196 in their 1st inning; a young batsman too came to the fore forging a rescue operation when all seemed lost.

Roston crafted- not plundered- a resourceful 137, his debut Test ton, helping his team Chase an unlikely draw, albeit rain-assisted, as he joined forces with Shane Dowrich at the other end. Kohli tried every trick in his alley. Brought on Ashwin. Attacked with Umesh. Then got Ishant to bowl a few overs. Then he rotated them. Finally, he got a spinner and pacer bowling in tandem but Roston Chase just didn’t budge.

The meticulous sweeps, tightly controlled pulls, cleverly played singles, much of Day 3 and then, Day 5 (with fourth day’s play rained out) had Jamaica raving about one Universally-liked hero in the Caribbean. It wasn’t the Bossman Gayle. It was Roston Chase. It was no ordinary attack he was up against; much of India’s bowling arsenal was the same that one finds today having knocked the cleaners off England, in England.

Interestingly, this century would not be a flash-in-the-pan occurrence too for the tall batsman known for a tight defence. A year later, he compiled two gritty centuries against the neighbours of the very team he had defied in the Caribbean during his 2016 exploits.

Truthfully speaking, in the past half a decade of West Indies Test Cricket, if there are two unsung centuries that mattered a lot more than they were actually made to matter then it were Roston Chase’ tons against Pakistan in 2017-18 season. Against a side with names like Misbah and Younis, both legends marking their swansong series under the sunny balmy Caribbean sun, it was one West Indian batsman who stood out. Roston Chase.

This time, however, much to the delight of home fans in Barbados during the 2nd Test where a 210-ball-stay at the crease resulted in 131 delightfully-stroked runs. here were pulls, rasp cuts, elegant sweeps and wristy flicks and what not.

Moreover, his century came at a strike rate of 63, that’s when he faced the chin-music from Amir and Abbas and the foxy spins of Shadab Khan and the legend Yasir Shah, the leg spinner finding comparisons with Messi on social media given his uncanny resemblance to the Argentine. Though, anyone watching the Barbados proceedings that won the match for the West Indies had no idea what was to follow.

In the Final Test of that 2017 tour, a series known by an endearing by-line “Mis-You,” as a mark of tribute to Misbah and Younis Khan, it was Roston Chase again who didn’t miss out on scoring.

As a matter of fact, at Dominica, he stayed put for 394 deliveries (collectively from both innings) and scored a total of 170 runs, including a brilliant 101 not out, perhaps the single-most determinant of the fact that how or why the Roston Chase we are seeing, at present, can do even greater things.

Things like that massive moment where he stayed put until the very end and nearly won the game for his West Indies before Gabriel ill-afforded his team the chance to draw the game by falling to an unwanted stroke on Yasir Shah, which he never really should have attempted.

For at the other end was Roston Chase who could have played out the final remaining over in that truly unforgettable Test. That was Roston Chase at his peak. The man who’d go to India in 2019 and shine bright at Hyderabad, albeit ending again on the wrong side of the result.

The man, who’s currently the highest-scorer in the ongoing CPL, where his blazing exploits and tall sixes have earned him the backing of the selectors who picked him for the World Cup squad. In between, though, these glories and highs rest several failures, such as the one seen against Pakistan who recently were in the Caribbean under Babar Azam’s leadership, where it seemed one of their key purposes was to put a tap on Chae’ scoring.

And boy did they succeed! With scores of 10 off 24 and a nought off 15 from number 5 Chase couldn’t do much even as the rest around him were falling like ninepins. Previously, he’d made 21 off 51 and 22 off 56 in the First Test. This was, though, from number #4. What’s not helping the quiet, thinking cricketer in any way is that the team have still not zeroed in on his fixed batting position.

How can you rotate, even at the back of being a tad bit experimentative, your most dependable batsman’s place in the pecking order. Not that Chase himself would’ve resisted the challenge though he’d surely have kicked himself hard at failing to contribute to a team for which his heartbeats and where his destiny lies.

Next, he’d score a dogged 51 and stay put for nearly 14 overs, vital runs collected, however, from number 6 at the behest of inclusion of a specialist number three in Brooks. Though, soon he’d fall for a 6 off 19 in the final inning of this Test when he was surprisingly made to bat at 5.

On both occasions, an early loss of wicket had compelled Brathwaite to send in a night-watchman, though that should not have led to a change in the batting order of a batsman who’s, as of the last 18 months, been through so much change (batting order) that it may suit him to call him Roston “Change!”

Though what fans cannot ignore neither can Roston Chase himself deny are the pitiable runs with the bat he’s made against South Africa recently barring that brave 62, which saw the right-hander make a sparkling fifty when the team’s total was barely 162.

Beyond that, he’s seemed suspiciously short on craft and application against the short ball. The likes of Rabada, Ngidi and Ashraf, in more recent times have changed their angle and hurried upon him, putting to test his rib cage.

What Chase ought to do, instead of just spending time in the middle is to find a way to not get out to off strokes. The wild heaves at deliveries pitched just a touch wide outside off isn’t too inspiring sight, especially when one recollects the watchful batsman who conducted himself with a bit more restraint, exercising caution over carefree abandonment.

Can that Roston Chase be found again?

No reason to think why not. The miserly off-spinner who’s even bagged an 8-for and thus seen a rise in his all-round stocks has all the traits to flourish as a batsman. A mainstream bloke he is but a highly reliable one at present- we don’t know.

Moreover, his team needs to speak to him, not that he’s lost confidence but generally. At times, just patting one’s back and reminding one of his qualities works better than medicine under serious duress.

The old Roston- the trier, the doer must return only so he can Chase more glories for his West Indies. Surely, there’s more to him than a Test batting average of 28. 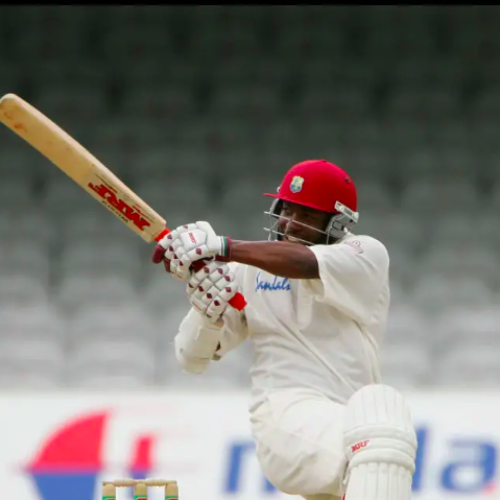 Opinion: Dinesh Karthik should be India’s first-choice wicketkeeper in the T20 World Cup

WI vs BAN: West Indies’ Cameron Cuffy once awarded man of the match without even batting, taking a wicket or a catch