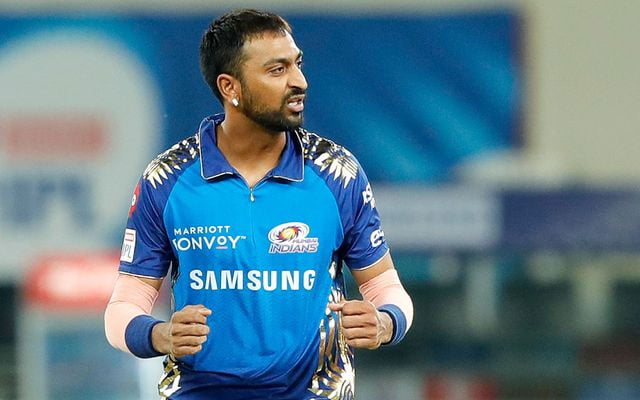 Krunal Pandya has been a pretty good contributor for his team with the bat and ball for Mumbai Indians in the just-concluded edition of the Indian Premier League. The left-hander may not have played big knocks but considering the position in which he came out to bat, he surely made his presence count on the pitch by playing superb cameos in the tournament.

Hardik Pandya’s elder brother has scored 109 runs in 16 games at a decent strike rate of 118.47. He ended the tournament with as many as six wickets to his name in 16 games at an economy rate of 7.57. Krunal registered his best bowling figures of 2/26 during the league stage match against Delhi Capitals.

The Mumbai Indians all-rounder has landed himself in troubled waters after he was stopped at Mumbai International Airport for carrying undisclosed gold in his luggage. After winning the IPL with Mumbai Indians, Krunal Pandya and his wife Pankhuri Sharma booked a flight from Dubai to reach Mumbai.

“Cricketer Krunal Pandya stopped by Directorate of Revenue Intelligence (DRI) at the Mumbai International Airport over suspicion of being in possession of undisclosed gold and other valuables, while returning from UAE: DRI sources” a news agency tweeted.

According to the rules laid out by the senior authorities, all male passengers who are arriving in India from Dubai can wear up to 20 grams of gold which should cost more than INR 50,000 as a duty-free allowance. In addition, a passenger can carry an excess amount of gold and other valuables as he wants considering if he reveals about the same at the customs and pays the fixed import duty. It should be noted that the import duty on bringing gold to India is 12.5%.