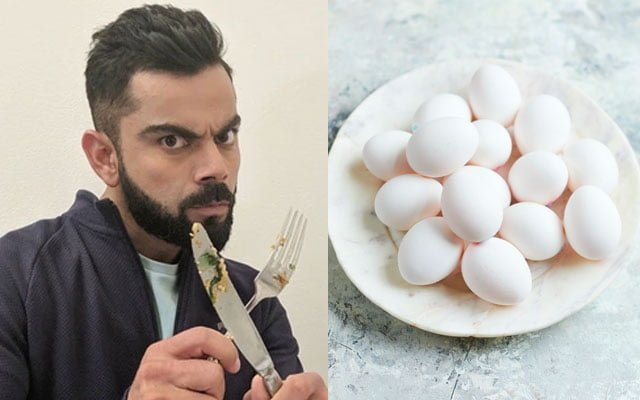 Indian captain Virat Kohli is arguably the best batsman in the world. His ability to deliver the goods consistently across formats makes him the best in the business. He is the only batsman in the current era who has maintained a batting average in excess of 50 in all formats. This goes to show his potential as a batsman.

The run-machine is also a terrific match-winner. Time and again, he has helped chase down big totals and earned the tag of a chase master. Apart from his incredible batting potential, he has proved worthy of himself as a captain. However, he is yet to win an ICC trophy as a captain of the Indian cricket team.

However, he will be gunning for success when his side takes on New Zealand in the inaugural edition of the ICC World Test Championship final in Southampton at The Ageas Bowl on June 18. Meanwhile, all of a sudden, fans started to troll Virat Kohli for consuming eggs.

A certain section of the fans wrote: “Egg eating vegan Kohli”. This soon went viral on the internet and it also caught the attention of the Indian captain, Virat Kohli. The 32-year-old skipper made a sensational comeback to the trolls by issuing a great response.

Virat Kohli strikes back after being criticised for vegan controversy

Kohli wrote that he never claimed himself to be a vegan. He said this in response to the users who trolled him for including eggs in his diet. He came up with an apt response to put the controversy to an end once and for all.

The incident unfolded when Kohli shared his diet plan during an ‘Ask Me Anything’ session on Instagram. Since Kohli mentioned “eggs” in his diet, a section of users questioned how vegan Kohli could have egg in his diet.

During an Instagram chat a few years ago with former England cricketer Kevin Pietersen, Kohli spoke about how health issues prompted him to change his diet. “I had a cervical spine issue which resulted in a tingling sensation in my little finger making it difficult for me to bat. It happened around the Centurion Test in South Africa in 2018.

Moreover, my stomach became a bit acidic, my uric acid went high and my stomach started pulling calcium from the bones which actually resulted in the spine issue. Hence, I had to cut down on meat and now I feel better than ever,” Kohli said back then.