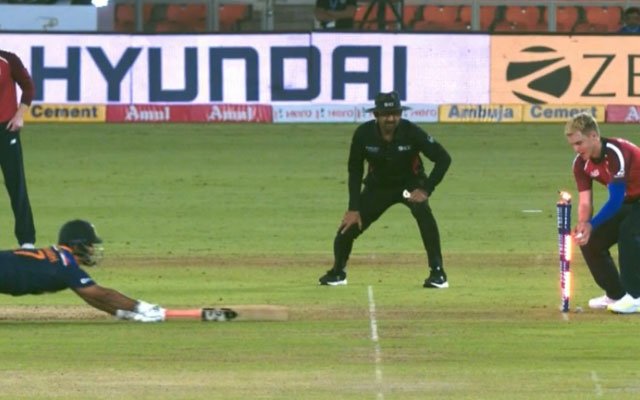 On Tuesday, India took on England in the third T20I of the five-match series at Ahmedabad with the series being levelled 1-1. Put in to bat first, India lost KL Rahul for a duck in the third over of the match to a peach of a delivery by Mark Wood. After showing some intent, Rohit Sharma (15), who was rested for the first two T20Is, scored a couple of boundaries in his brief stay at the crease. Ishan Kishan (4), who was the Man of the Match in the second T20I failed to impress as he fell prey to a well-directed bouncer from Chris Jordan. Tottering at 24-3 in 5.2 overs, India got off to a horrendous start.

In pursuit of consolidating the innings and steadying the sinking ship, skipper Virat Kohli and wicket-keeper bat Rishabh Pant got together and put up a 40-run stand before the latter was run out at the start of the 12th over.

Facing Sam Curran, Pant punched the back of a length delivery towards the sweeper cover region and the duo completed an easy two. The throw came in from deep to Buttler at the striker’s end, who tried to deflect it backwards on to the stumps cheekily, and Kohli, meanwhile, called Pant through for a third. Pant, who already ran well ahead of the stumps, had to complete almost one and a half runs to get back to the non-striker’s end. Buttler collected the ball and threw to the non-striker’s end and Curran completed the formalities.

On the big screen, Pant could be seen well short of his crease. Even his desperate dive did not help him. The swashbuckling southpaw departed after scoring 25 off 20 balls, his innings laced with three boundaries. After the bizarre incident, the fans took to Twitter and both Pant and Kohli started trending. On one hand, there was a flood of funny memes, while on the other hand the connoisseurs of the game expressed their displeasure by criticizing Kohli.

In the hindsight, there could be broadly two arguments. First, could Rishabh Pant have said a “No” to his skipper for the third run, considering the fact that he had over-run the second one? Second, if the wicket-keeper batsman would have said a “No”, would Kohli have made it back to the non-striker’s end?

With the third T20I being done and dusted and England taking a 2-1 lead in the series, it is better that the discussion on the run out is put to rest and the focus is swiftly shifted to the remaining two T20Is.