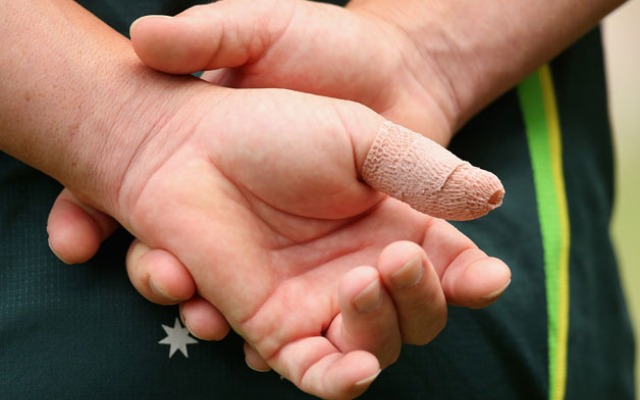 In the game of cricket, we often see many cricketers taping their fingers especially when they are fielding. Why do they do so? And, how does a tape help?

As they say, prevention is better than cure. Cricketers tape their fingers to prevent themselves from serious injury. The taped fingers help them to reduce the impact of the cricket ball to reduce the risk of injury. Meanwhile, many cricketers carry minor injuries and they tape their fingers to minimize the risk of the existing injury getting worse.

Reasons behind the cricketers taping their fingers

Fingers injury are the most common and frequently occurring injuries in the game of cricket. The fielders are not permitted to wear gloves and usually, the hard ball travels toward them at a great speed. If that ball is not met at the right place, then it is likely to cause an injury to the hand.

The tapes provide at least some sort of protection from the initial impact that is likely to cause the damage. However, it is not the only purpose of taping the fingers.

Why do wicketkeepers tape their fingers?

Wicketkeepers have to gather the ball behind the stumps at the raw pace. Furthermore, they have to do it consistently and it is a difficult job. There is definitely some protection for the wicketkeepers as they wear gloves and these gloves certainly help them to grab the ball cleanly.

These gloves are specially designed with a web between the forefinger and the thumb. These gloves also provided added security to the fingers with rubber protection to prevent fingers from jamming into the ground. Meanwhile, the wicketkeepers wear the tapes for the same reason as the fielders did. They wear the tapes to reduce the impact to avoid injuries.

Which tape do cricketers use?

Cricketers use sports and athletic tapes but there is not any cricket-specific tape. There are some sports like combat sports and rock climbing in which the athletes use game-specific tapes. Those tapes are designed especially for the given sports.

How to properly tape your fingers in cricket?

If a fielder wants to tape only a couple of fingers of his one hand, then he can do it himself. However, if he has to tape the fingers of both hands then, it turns into a two-men job. Once you have taped the fingers of one hand, it gets difficult to handle the tape hand taping it on the fingers of the second hand.

Remember, the tape is applied only to joint areas, not to the whole finger as it gets difficult to bend the fingers after taping it completely. The players only tape the whole finger when they try to protect an existing injury or wound.

What are preparations required for taping?

There is a whole list of tools you need to assemble before you start to tape your fingers. First and foremost, you need tapes. Then you need alcohol wipes to clean the fingers, and then you need the medical scissor to cut the tape properly.

Read More: Who is the Run Machine in Cricket?