Top Bollywood actress and Virat Kohli‘s wife Anushka Sharma has slammed a top news company for posting their daughter Vamika’s picture on social media. Both Anushka and Virat have returned to India from their vacation as the power couple was spotted at Mumbai’s private airport on Monday afternoon.

Anushka Sharma was seen wearing an all-black outfit alongside a boater hat, while Virat Kohli kept it cool and breezy in an all-white outfit. However, as soon as both Virat and Anushka stepped out of the airport, the paparazzi didn’t miss a chance to click them. In the process, they also clicked the pictures of their daughter Vamika, who was travelling alongside her mom and dad.

Now, a top news company has published Vamika’s pictures on the social media platform Instagram and also tagged Anushka Sharma and Virat Kohli in the post. It didn’t go down well with Anushka as she directly commented on the post and slammed the publication. In case you don’t know, Both Anushka and Virat have requested and appealed to the media several times in the past not to post Vamika’s pictures.

In the comment under ET Times Instagram post in which they posted Vamika’s picture, Anushka commented, “Seems like times group knows what’s better for kids than their parents themselves as they can’t stop clicking and posting photos despite being requested repeatedly. Learn something from other media houses and paparazzi.” 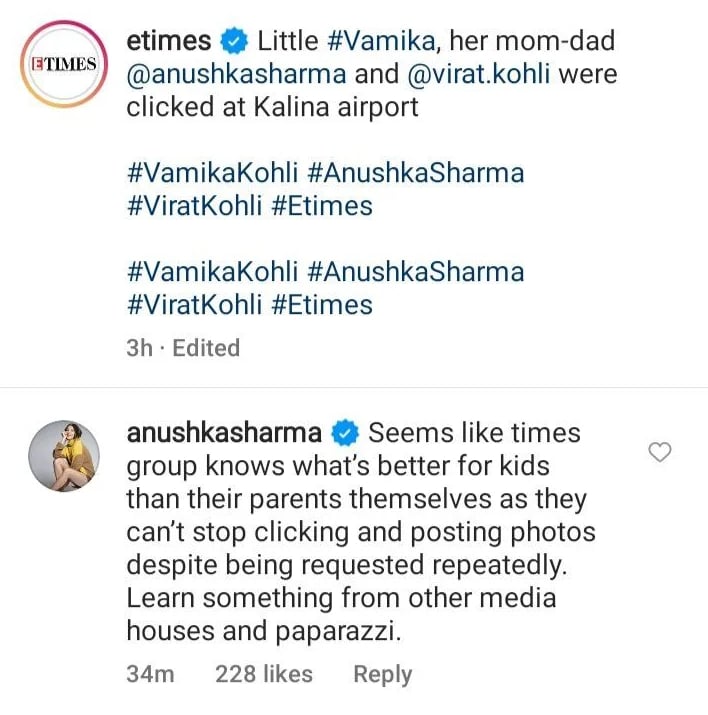 Notably, the couple was on a beach vacation at an undisclosed destination. Virat Kohli is currently on a small break from cricket post an underwhelming Indian Premier League. He was rested by the national selectors for the South Africa T20 series but he will return to the action on England tour and the rescheduled Test.