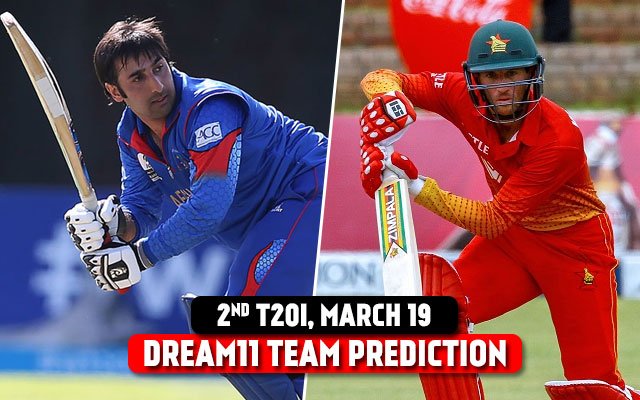 The 2nd T20 match between Afghanistan and Zimbabwe will be played on 19th March at Sheikh Zayed Stadium, Abu Dhabi.

The match is scheduled to start at 2:00 PM local time and 3:30 PM IST and it will be streamed live on Fancode.

Afghanistan will take on Zimbabwe in the second T20 match on 19th March. Afghanistan have won the first T20 match with a margin of 48 runs. They are looking in good touch. They have become a better T20 side now as most of their players are playing T20 leagues around the world. They will come as favourites in this match.

On the other hand, Zimbabwe is a very less experienced team right now. They are building their team from scratch. They have to fix their playing eleven and have to put all the efforts as this would be a do or die match for them if they want to survive in the series.

It is expected to have clear sky. The humidity would be 33% and no precipitation is predicted. The temperature would be hovering around 27 degree Celsius.

The pitch looks balanced. There is equal help to both bowlers and batters. The average score has been only 141. According to last five matches, the record of chasing team is really good. So, it is highly likely that whoever wins the toss would prefer to bowl first.

Rahmanullah Gurbaz played a match-defining knock of 87 runs in just 45 balls and gave his team a wonderful start. In last 9 matches, he has scored 376 runs with a strike rate of 146+. He is a good pick.

Rashid Khan bowled fantastically as usual in the first match. He picked up 3 wickets just by giving 28 runs in 4 matches. In last 9 T20I matches, he has scalped 13 wickets.

Tinashe Kamunhukamwe played a magnificent knock of 44 runs with a strike rate of 118.19. His knock gave a good start to his team but that was not enough. He opens the batting for Zimbabwe and can get you some really good points.

Sean Williams is one of the best batters from Zimbabwe. Although he scored only 22 runs in the first match but his T20 record is good. In six T20 matches, he has scored 94 runs. He is a good pick.

Afghanistan are expected to win this match.

Follow Cricket Fantasy Tips for all the latest cricket fantasy predictions and tips.