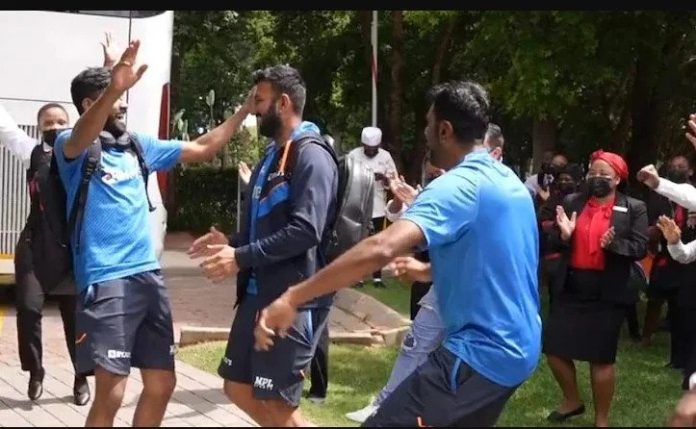 Team India cricketers Ravichandran Ashwin, Cheteshwar Pujara and Mohammed Siraj were seen shaking their legs with the hotel staffs to celebrate their Centurion win. India registered an emphatic victory by South Africa in the 1st Test by 113 runs.

Coming into the fifth day, India needed only six wickets to win the Test match. However, the Proteas captain Dean Elgar along with Temba Bavuma and Quinton de Kock resisted well to stretch the game but the Indian bowlers, who have spectacular had the last laugh.

India’s performance in the first Test earned them praises from all around the cricketing world. Meanwhile, Ravichandran Ashwin came up with a unique idea to celebrate the victory. The veteran off-spinner took it to his official Instagram account to post the video of them dancing and cherishing the victory against the hosts.

In the video, Mohammed Siraj, Cheteshwar Pujara, and Ashwin himself are seen shaking their legs and enjoying the moment.

“The customary post-match pictures got too boring, hence @cheteshwar_pujara decided to make it memorable by shaking a leg for the first time ever with @mohammedsirajofficial and yours truly. What a win 🤩🤩,” Ravichandran Ashwin wrote on Instagram while sharing the video.

Meanwhile, in another video, India captain Virat Kohli and head coach Rahul Dravid were also seen dancing with the hotel staffs to celebrate the victory, which is their fourth on South African soil in history.

Meanwhile, the India cricketers were seemingly happy with the win at the SuperSport Park. Rishabh Pant and Mohammed Shami also cutted a special cake at the team hotel after achievement major milestones in the Centurion Test. While Shami scalped 200 Test wickets in this match, Pant became the fastest Indian wicket-keeper to effect 100 dismissals going past MS Dhoni.

India will lock horns with South Africa in the second Test on January 3 (Monday) in Johannesburg.